Additional money can be earned through NBA call-ups. According to the G League, one-quarter of players earn an average of $44,000 in NBA affiliate player bonuses and call-ups on top of their base salaries.

The NBA cover G League salaries and pays bonuses to players on playoff teams, as well as to those who win end-of-season awards.

Two-way players earn $77,250, prorated for time spent on their G League roster. For time in the NBA, players will be paid the rookie minimum salary ($898,310), again prorated for the days they’re called up for. The maximum potential earnings for two-way players is $385,000.

NBA franchises do not own exclusive rights to all of their affiliate G League players. Players outside of the two-way and assignment bracket are available for NBA call-ups. Technically they’re free-agents.

Players may sign regular NBA contracts but also 10-day contracts. Between January and April, teams can use this method of signing a player. Although, a player can only be signed to a maximum of two consecutive 10-day contracts. After that the team must sign the player for the remainder of the season or release him.

The salaries of 10-day contracts depends on the NBA experience that the player holds. Here it is broken down, via Hoops Rumours 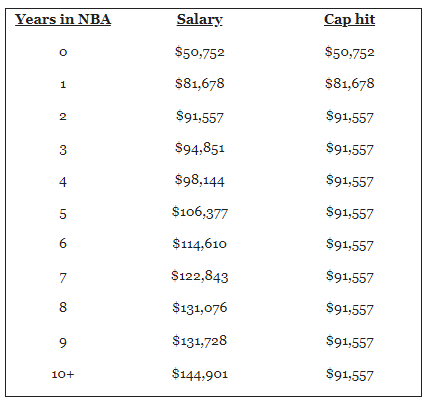 An Exhibit 10 deal is essentially a 1-year non-guaranteed deal worth the NBA minimum salary. These are predominantly distributed to NBA hopefuls in summer training camps.

Such deals can include option bonuses ranging from $5,000 to $50,000. This can act as an incentive for players to commit to their team’s G League affiliate, as opposed to going abroad. But 60 days must have passed, in terms of the player being with the G League affiliate, before bonuses are paid out.

Exhibit 10 deals can be converted into two-way contracts too, where the player is still entitled the bonus. Even if they’re waived at a later date.

The G League professional pathway program/select contract was first introduced in October 2018. It was created to allow elite prospects (18+ years old) to develop before being eligible to enter their respective NBA draft class. As opposed to taking the college, or overseas, route to the professional ranks.

The contract offered was initially set at $125,000 for a 5-month season. This was “reshaped” in April 2020. According to various reports, the new initiative will pay prospects $500,000+. Each player case reportedly differs, however.

Additional funds can be earned through appearances, development duties, and community initiatives. Prospects can acquire endorsement deals on-top of their salaries.

As of April 2020, it has been reported that the professional pathway program will be fed through a select team based in Los Angeles. This team will receive professional coaching, training, and exhibition contests, alongside professional veteran players.

It is understood that the amount of games played will be around 20, away and condensed from the traditional schedule. Opponents will be other G League teams, overseas national teams, and NBA academies.

Jalen Green and Isaiah Todd, both in the class of 2020, were the first players to sign-up to the reshaped program.

More information on the professional pathway program/select contract can be found here.